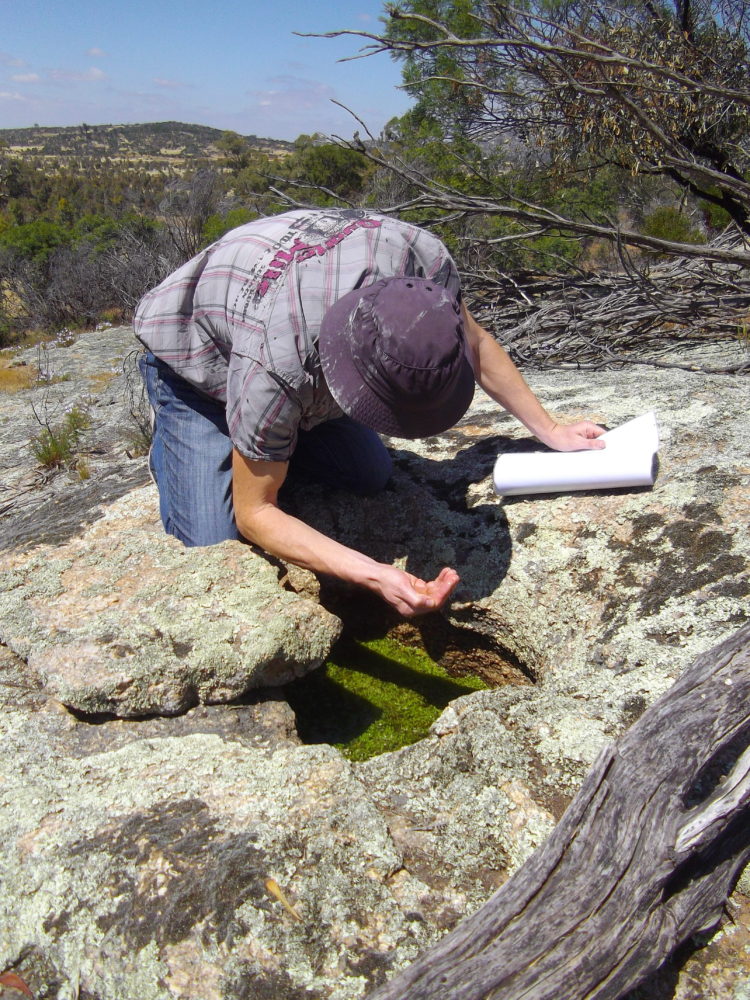 When the Mathews family learned about the special ecological qualities on their 45 ha property they knew it was a special place.

What makes the Central Victorian property even more unusual are the more than 20 ephemeral pools known as gnammas which fill with water, rare aquatic plants, Clam Shrimps, and crustaceans.

The property also has an Indigenous rock well with an intact lid, which is a significant Indigenous cultural heritage site, along with scar trees.

Rainer Mathews said, “It’s amazing to have such rich ecology and cultural heritage on our property and to be able to protect rather than destroy it.”

The Mathews are one of 36 landholders across Victoria who took legal steps to protect their property in 2018-19 by putting a conservation covenant on it, bringing the total number of properties covenanted in Victoria to more than 1,400.

Covenants are voluntary agreements that are tied to title and protect plants and wildlife on the land forever, even when the property changes hands. They are a bit like creating state or national parks, but over private property.

Trust for Nature is the organisation that has the power to protect private land permanently in Victoria, using covenants on title.

More than 4.5 million ha of private land is protected under covenant across Australia, including 67,000 ha in Victoria.

Trust for Nature CEO Victoria Marles said putting a covenant on land is one of the most important things someone can do to give threatened species a home forever.

She said, “Victoria has the highest amount of privately owned land in Australia and it’s the most developed.

“With the decline of threatened species, protecting habitat is one of the single most important things a landholder can do to halt extinction.”

Sixty per cent of our valuable and threatened habitats are on private land so landholders are some of the great champions in preventing species extinction.

In 2018-19 Trust for Nature also developed 157 conservation management plans to support property owners, controlled weeds across 10,900 ha and did more than 200 ecological surveys on covenanted properties.

Trust for Nature is one of the Australia’s oldest conservation organisations, set up in 1972 to enable nature conservation on private land.

Rainer Mathew said his family are relieved that the native plants and animals on their property will have a safe home forever.

He said, “We want to explore new ways of using the land that enhance the natural values of the place, and protect them for future generations.

“We thought we knew a lot about our property but since working with Trust for Nature we’ve learnt so much more.

“We now have a management plan that documents the values of the land, and puts in place a detailed plan for protecting them. We’re doing a whole lot of work on the ground, and already seeing results. We’re really excited about the future.”

Trust for Nature is a not-for-profit organisation that relies on the generosity of supporters to help us protect Victoria’s amazing biodiversity.

Main photo: The Mathews family on their property in Central Victoria.

mathews family
Back to all news